I've always admired people who could play musical instruments.  As my father said to me, if you can play the guitar, you'll always be invited to parties. Unfortunately, I started to play the violin and not, it has to be admitted, terribly well. Nevertheless, I clearly remember being in the Student's Union bar.  A Music student played the piano and he had the ability to play by ear.  With a few hummed notes he could reproduce any tune requested by the remains of  a late night audience.  To this day, I remain impressed by the casual confidence with which he did something truly well. 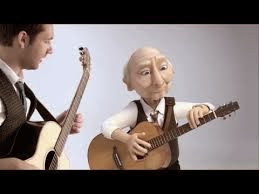 I was reminded of this recently by one of the Wonga adverts, featuring a highly talented guitarist - Ben Lapps - playing against a CGI  (computer generated imagery) old man character. Initially, I was struck by the musical talent on display and especially by the apparent lack of effort it took to produce such a bravura performance.  Later on reflection, it was the quality of the CGI and the skill taken to reproduce the old man playing the guitar that surpasses the musical ability on display.

It was computer science that made it all possible and it was with the support of  computer technology that helped CGI artists to produce such a misleadingly simple advert.  I mean, how would you go about producing such a high quality CGI character that apparently plays a real guitar with such skill?

So there are plenty of creative as well as technical jobs in computing, but what skills do you admire and what would you like to do really well?