Everyone has got a talent.  For most mortals it takes time to find out what you have a talent for.  It might be for music, running, throwing the javelin or even doing maths or writing. Occasionally though, every once in while someone comes along whose talent is obvious and outstanding.

In this case the talent is Morgan Spenny who specialises in Stop Motion lego films.  Have a look at the film below.  In the words of the great Bruce Willis.  It has all the action you need: helicopters, car chases; man hunts and gun fights. Despite having no romance, nobody could reasonably ask for anything more.

From a technical perspective, the short film reveals a rich understanding of the film making process.  At its heart is a strong story that everyone can understand. It features tracking shots, over head shots and shots from different camera angles to re-enforce the impression of movement and add a dynamic feel to the film.  The film is further improved by the use of clever shifts in focus to give a feeling of depth, changes in perspective and by giving different points of view from each character to help develop the story.  A classic moment is when the villain escapes from the mail van and the camera moves to look over the shoulder of a member of the public half hidden by the building and  ringing the police.  The camera suddenly changes focus to give the impression of the villain moving off into the distance.  The film is brilliant.

More of Morgan's films can be viewed at his own website at http://morgspenny.host56.com/.  Its well worth a visit and it shows how he made it.  I'm sure, time allowing,  Morgan will only be too pleased to help others out and share his secrets with everyone.

His films also reveal personal qualities beyond just a technical understanding of how to make films.  I should imagine they require perseverance, a degree of patience, which I ashamed to say escapes me, almost obsessive attention to detail and a high degree of problem solving ability to get the effects he needs with just lego.

Anyway watch the film - it's well worth it.  What do you think?  What's your favorite moment? 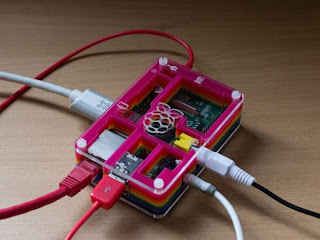