I love it when a plan comes together!

so said Col 'Hannibal' Smith of the A team.  Or, as its described in tech circles: Convergence. 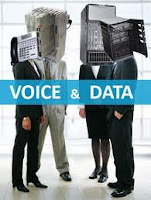 Convergence is all about the tendency of different  tech systems to come together in one device because they share some common characteristic. The smart phone is an excellent example of this.  Which because they all rely on digital data brings together telephony, email, still photography, video photography, music player and game players in a single device.

On the face of it, this seems a really good idea.  Just think of it:  all that stuff you can do on one piece of tech.    No more multiple cameras, music players, wrestling with all those cables, accumulated old junk or struggling to find that elusive adapter which only fits that old I POD.  All these things replaced by one small device which you can carry around in your pocket.  Talk about Star Trek tech: buckets more computing power in your hand, than that which put man on the moon. Its amazing!

By giving up all that other 'old'  tech and relying on that latest smart phone suggests that everything it can do, approaches the quality of what each piece of technology can do separately. But does it: does it really?

Was Skyfall filmed using an I phone 5.  Do you think the new Spidey was made using a Samsung Galaxy?  No I think not.  Judging by most of the content on You tube, your average phone video camera just about manages to film dogs saying 'sausages' or your least favourite Aunt doing the splits while getting out of that boat.  Funny it may be, but James Cameron and Avatar it is not.  At its very best, it might get you £250 on Who's Been Framed!, but it won't get you that Oscar.


What about the digital camera then?  Ha! that's just as risible.  I don't see world renowned photographers  David Bailey, Ansel Adams or Annie Leibovitz using the Motorola RAZR or the HTC One:  though David Bailey was quite a fan of pocket cameras for those candid party pictures.  Despite increases in resolution (number of mega-pixels) phone camera's still seem to be only good for pictures of yourself with mates at arms length.  Anything else becomes tiny dots in the far distance.  And if the new ads are anything to go by, the trend is for quality, faster DLSR's (digital single lens reflex) cameras with changeable lenses that offer more control and flexibility to the user:  Think of the Nikon 1 or the Canon EOS 600.

Yes using them for email can be good but the emphasis is on the word 'can'.  Nearly everyone I know, including myself use 'smart' phones for reading emails.  But few use phones for actually writing emails.  They prefer to use larger screen devices like tablets, or proper keyboards for faster typing, than pecking around a tiny screen with two thumbs at the very best.

Phones as a music player would appear to offer a distinct advantage.  Speech, music its all sound isn't it?  True, but think of the storage.  My music collection, which is not that large is about 35Gb.  Not many phones have that amount of storage.  Anything less would require me to add, delete or edit the content of music on a continuous basis.  With a music player with a capacity of 140 Gb, I'm not going to have to worry about storage capacity for music for years, if ever.  Just load and play.

OK, forget about cameras, emails and music.  What about game play?  Doesn't that bring home the Kevin Bacon for smart phones?  Yeah right!  Smart phones might be all right for Tetris or for that lunatic plumber Super Mario, but do you really want to play Halo 4, Bioshock 2, Medal of Honour or Farcry 3 on a tiny screen and loose all that amazing explode off the screen, graphic detail.  No, I didn't think so.  'Yes but', you may say, you can play while waiting for the bus or when you're out an' about.  But why put up with tiny screen and tiny experience just because you're out.  What's wrong with waiting until you're back home.  If you're really stuck for something to do: READ a book.

And mentioning books, what's wrong with with using phones as an e-reader?  Plenty, when compared to dedicated e-readers like Kindle.  For a start with Kindle, you get a bigger screens to save all that scrolling.  Then you save thousands of books without worry and you get clearer and easier print to read together with chance to change the font size.  And perhaps most importantly, the battery life is for days if not weeks when compared to only hours for a phone.

What about apps.  OK you got me.  But really how many of these apps are any good? Maps possibly, but the only app I've wanted is the whip sound from the Big Bang but only so I can annoy my friends in the same way as Sheldon Cooper.  Of limited usefulness and entertaining in their own way they're all so much froth.  You can live without them and when you can use a laptop of a tablet, the importance of those apps falls even further away.

Even as a phone, smart phones aren't that good.  OK but not great.  Coverage isn't always 100% and signal strength comes and goes.  At Crinan, its always entertaining watching people wander up and down the canal side, arms stretched out,  straining to hold their phone up to the sun like an ancient Druid performing a bizarre ritual.  All in a vain attempt to catch a fragment of signal strength while a phone mast is positioned barely 600 yards away around a headland, and as if that extra 2 feet closer to sun is going to make the difference.  Of course what is needed for true coverage, is a SAT Phone.  100% coverage, all around the world.  A bit expensive maybe, especially when all you've got to say is 'WHAAAAATS UUUUUPPPP!'

So it appears, smart phones aren't that smart after all:  they can do some stuff OK, but they're a bit of a jack of all trades and master of none.  What you have to decide, is whether you want to be like a smart phone. Spread yourself about and do lots of things moderately OK, or become a master:  pick a few things to do really really well.

Email ThisBlogThis!Share to TwitterShare to FacebookShare to Pinterest
Labels: Convergence

Hooray! Windows 8 is out at long last.  I know its been sometime, but to play fair, got to spend some time to look at it, to see how it goes.

Well it seems to go pretty well for touch screen devices.  If you've got desktop or laptops running Windows 7 I don't think there's too great a reason for changing.  Unless that is, you like the Metro UI (user interface for those not in the know) and I do.  It's especially great for touch screens.

In fact I like it so much, I've re-designed our Science Courses menu around it.

In the beginning, you could have any colour computer you liked, as long it was beige! I've no idea why why. It may be designers wanted computer's to blend into the background and offices being bland soulless places meant that computer's had to be beige. Or, it may have been something to do with chemistry - the only colour they could get to work with plastics, or more likely they simply weren't concerned with what computers looked like:  they were too busy trying to get them to work.

With the reliability of computer parts improving, laptops appeared on the scene and lo', a whole new world of colour was opened up - not!. Now you could have any laptop you like as long it was black, or various shades of dark gray.

At the same time Apple was falling into economic trouble while it was trying to launch the ill fated Newton hand held.  But then a saviour appeared.  Not Steve Jobs, but a true British hero Jonathan Ive, now head of design at Apple.  He looked around him and saw all was dark and he walked upon the face of the dark, and said 'let there be light' and the coloured see through IMAC was born.

Known by some, as ladies' computers, because they chose them by the colour, they could have heralded a new age of colour, but then Jonathan Ive gave up on colour.  Now everything Apple, has to be abattoir white. But there is a rebellion under-way   Some computer manufacturers  are beginning to produce laptops in different colours and with lots of coloured covers for tablet computers appearing, we could be moving into a bright coloured future.


The thing is, what colour would you like for your device(s)?  Do you prefer the binary world of black or white or do you want a different future?  If you could design a cover for a tablet or computer what would it be like?  Produce it in Fireworks or a similar program, and have it featured on this blog.  Can you be the next Jonathan Ive?


It’s not like I’m affected by advertising or anything, but the future’s bright, the future’s orange!  Things are changing!  Thank God 4 EE!  OK I admit it.  The last one I made up, but there really is a Kevin Bacon game called ‘Six Degrees of Kevin Bacon’.  Fun for all the family.  Go on ... Look it up!  Not now obviously.

There’s lot of new phones about, with new models appearing every six months or so.  What I want to know is what’s the best phone for teachers to have.  Mine’s an old, old  HTC  - An HTC Diamond I think.  The one with the big screen - running Windows 6 mobile.  Mr McGivern’s an old iphone which thanks to his action man lifestyle is looking a bit frayed around the edges.  So what phones should we have.

I was thinking about the new iPhone, but then I came across this ad.

I quite like the Samsung S3 apart from the outrageous cost.  Then there is Nokia Lumia running on Windows and HTC One X running Android.  And last but not least there are always Blackberry’s.


So which phone do you recommend and why?
Posted by Unknown at 10:26 0 comments

Email ThisBlogThis!Share to TwitterShare to FacebookShare to Pinterest
Labels: Phone


Browsers! Love them or loath them.  All computers have them.  Without them we couldn't do even half of what makes computers useful; from watching catch up TV, films or ‘dogs do the silliest things’ on you tube; from internet shopping to catching up on gossip; from mixing with friends on social networks to researching for projects.  All of these need internet browsers.

Fortunately these programs are free and easily available.  Unfortunately not all browsers have been created the same and opinions vary as to which are ‘good’ and which are ‘bad’.  Luckily there are lots of people out there on the 'inter web' with many, many hours of experience keen to share their thoughts and save us a lot of pain and grief discovering all the problems they've worked out for us.

They are also very creative people and try to get across their experience by using info-graphics comparing programs with common familiar things.  Like the one that compares browsers to guns.  And yep! You might as well shoot yourself, if you use Internet Explorer, or repeatedly slam a car door on your hand.  Both cause extreme pain and achieve nothing

The other graphic compares browsers to celebrities.  You may not know who all the people are, but you can get a general impression. FireFox good, Chrome better, Internet Explorer very bad, everything else in-between. 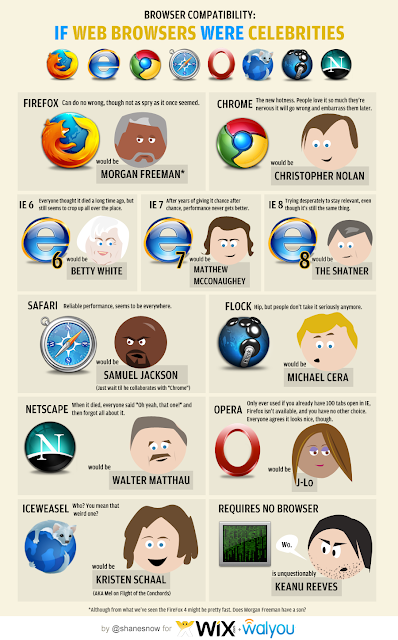 Anyway which browser do you use and why?  What’s it good at, that the others aren't   Can you achieve world wide fame by creating a info-graphic comparing browsers to something, perhaps to cars or tv programs?  Ask yourself, which Browser would Sheldon Cooper use?
Posted by Unknown at 14:31 0 comments